skip to main | skip to sidebar

I hate not being high

I've been grounded for like 2 weeks. I got like 11 days left. The cops found me and my friends smoking pot and my dad found out and he was like "nigga yous grounded" im like "fuck". so now ive been sober for like 3 days and i just hate life when im not high. I just want dome damn weed I'm so fucking bored thats why I'm writing on this blog I forgot I had.
Posted by Fizzlo Fliskin at 12:59 PM 3 comments:

I don't know who will read, my fan base is basically gone. I don't know what to say anymore. I honestly don't know what to say. I've been so scared to come on here for months. I've been going through severe depression and almost killed myself several times because of problems in life. It's not that big of a deal though, I heard like 12% of teenagers go through that or some shit. I've been attending therapy twice a week and I think my psychotherapist is very nice. I'm not a perfect person. I cry almost every day when I remember this place. I've wasted a whole year of my life moping and crying like a bitch. I've lied to you all and let you all down and I'm so very sorry. I fucking hate my life and I hate living like this. I've spent my whole life regretting everything I ever did. 3 fucking years. 3 goddamn years ago I drew my first illustration of my infamous fat bird thing. Back then, I was a much happier person. 12 years old and my life was perfect. I actually loved life. And I dont know what the fuck happened.
I don't even know why the fuck I'm writing this shit. I feel like a crybaby ho crying for attention. I'm a pathetic person who let all you guys down. Even though nobody read this, goodbye.
And if you did read this, please don't comment saying gay shit like "oh im so sorry" because if you do that, you'll make me feel 12x worse. I guess if you wanna comment just to let me know you read this or at least some of it, just say ok or something.
Posted by Fizzlo Fliskin at 9:25 PM 1 comment:

I'm taking a break from Fizzlo for 2 weeks. I have to wait until Christmas because that's when I'll get a new mic. The main reason I'm doing this is because in Episode 3 Mr. Khil is really hard to understand. And by the way, Mr. Khil's voice is most likely gonna surprise you if you watched the godawful episode 2 (2007 edition).
Also, I'm not sure if I'll be posting THAAAT much simply because I really do feel like I'm talking to myself and I want to wait until I see people actually reading this thing. .

So yeah, enjoy your day. But of course, I'm not going to leave you guys empty handed.

Below is the script for Episode 4. It's defiantly not the script I'm the most happy with, but I wanted to show you guys something (like I said before)


The reason I put it there is to keep this page from overflowing with words.

Quick Update and What Fizzlo is about 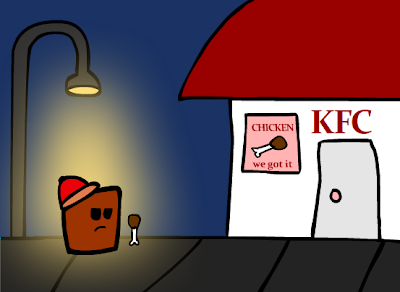 Alright, as of now I have a list of almost 40 episode IDEAS written down for Fizzlo, 6 scripts, 2 storyboards, and 2 and a half episodes done. The first episode is over 10 minutes long and does a decent job showing what Fizzlo is about. It also introduces a lot of the main characters (Fizzlo, Fudge, Chubi, Gurgle and Quack). Episode 2 (Can't touch Quack) is a lot shorter than most of the other episodes will be. It introduces Quack a lot better and also introduces his enemy, Cookie. It's 3 and a half minutes long which is why on the day I air the first episode, I'll also air the 2nd. The 3rd episode (Fudge the Nerd) is half way done. Right now it's 3 and a half minutes long so it'll probably end up being 6 or 7 minutes long. It introduces Mr. Khil, Plop, Gylo, and a few other classroom characters. And in episode 4, Chewy is first introduced.

So yeah, that's where I am right now. I started Episode 1 in June. Animated 1 minute of it. Then summer came and I didn't work on Fizzlo at all. Then in October I animated the other 9 minutes of it, made the 2nd episode and half of the 3rd. So yeah, I think this is pretty good considering it's now December. Oh and by the way, Cheeko has 2 storyboards and 1 script. But I'm not in control of that series at all (altough I made 1 character). 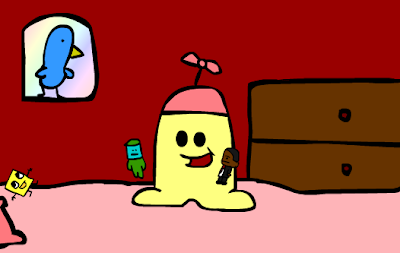 And I guess newcomers to this blog aren't sure what I'm talking about so I'll explain what "Fizzlo" is. Fizzlo is an animated cartoon about 5 boys who screw around and do idiotic things. Fizzlo is the nice guy in the group, Fudge is the jerk and self-proclaimed leader of the group, Chubi is the smart kid who is enemies with Fudge, Gurgle is pretty much the odd kid of the group who would rather be on his own, and Chewy is a retarded fat kid.
So yeah, catch you chaps later, I'm gonna go eat breakfast and then animate more.
Posted by Fizzlo Fliskin at 8:19 AM No comments: 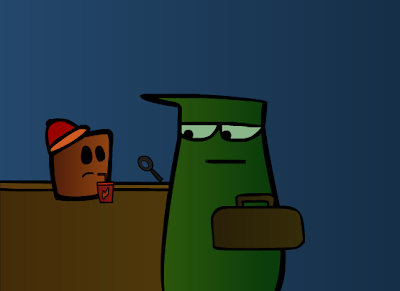 I know a certain group of people that'll remember this scene 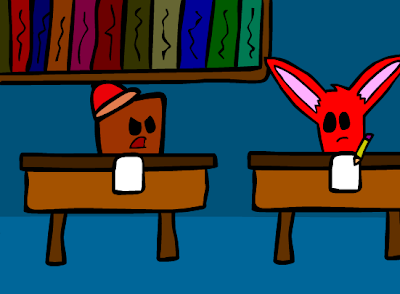 Fudge getting pissed in class 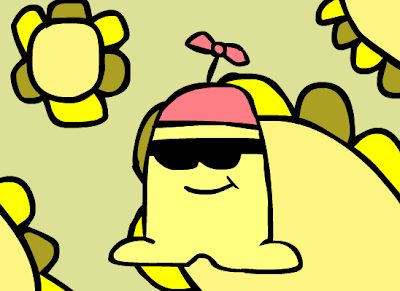 Quack is the man 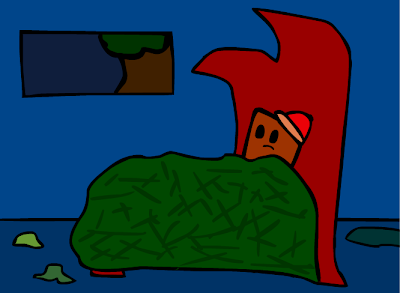 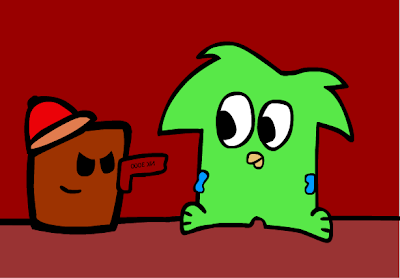 The tables have turned, eh?
And yes, these pics are from the first 3 episodes of Fizzlo.
Which are the Pilot, Can't touch Quack and Fudge the Nerd. 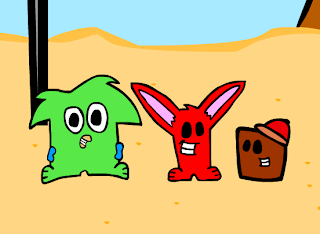 Why hello there. If you're one of the people who have been following me with this for 2 years, you'll know that I have created two blogspots and both have failed miserably (and the second one is seriously embarrasing ) but I truely have confidence with this one. But the reason I'm making this is to show you guys something time from time (like screenshots and maybe videos)and give you short updates on what I'm doing with Fizzlo. So yeah...be sure to check back for updates. Tomorrow I'll probably upload some screenshots from the first 3 episodes.
Posted by Fizzlo Fliskin at 9:01 AM No comments: